The Fulshear Farmers’ Market (FFM) opened its “doors” for the first time on Aug. 2nd, 2014. We opened that day with 12 vendors and no food trucks but the community support was phenomenal and the FFM was an immediate success.

It had been several years that I had tried to figure out how to get the overabundance of vegetables grown by residents in the Bois d’Arc area to those in our new Master Planned communities. Doug Konopka, of DHK Development stepped up by offering the old Winter Gordon Dirt Yard land for us to use. Doug had recently purchased the land and knew that it would be a couple of years before he would begin to develop so he kindly agreed to let us use it in the interim, as he envisioned a future Public Market at that location. Five acres of an empty field was perfect for a famers’ market and an ideal addition to keeping our “country charm and character”.

The first step was to get all of the proper permitting by the Health Department. Easy, right? NO! I made an appointment to meet with them and discuss my plans, having no idea that this endeavor would be looked upon as badly as if I had asked to sell body parts. Really, freshly made baked goods, local honey and fruits and vegetables? I was given about 15 hoops that I would have to jump through to make this a reality.

A few tears and much discussion later, the hoops had all been jumped through and the permits given. Several wonderful sponsors made sure we had enough money to pay for those permits. DHK Development, Mike and Lisa Mobley, Texas Country Properties, American Tax Advisors, New First Bank, Angie Ballis Massage, Above Grade Level Tutoring, Fulshear Mini Storage, Executive Finance Management and Martin Mortgage made the beginning possible.

Next on my agenda was finding enough vendors to make it worthwhile for patrons to shop with us. While I have many neighbors with big vegetable gardens, that just would not be enough to sustain a true market. I sent emails to my fellow Master Naturalists, Master Gardeners and anyone else I could think of (along with a Facebook plea) that might know someone who needed an outlet for their produce or homemade goodies.

The responses came in slowly: “How long have you been open?” “Well, we’re not actually open yet.”; “Where were you located previously?” “Um, nowhere.”; “How many patrons do you expect?” “Sorry, I have no idea.” And the best one “Where is Fulshear?”!! We wanted to be careful that every vendor we accepted grew or produced their goods within a 200 mile radius of Fulshear so as to keep the carbon footprint down and assure that all of the offerings were fresh and local. To this day, we visit each farm to insure that our farmers are growing the produce they bring to our Market. 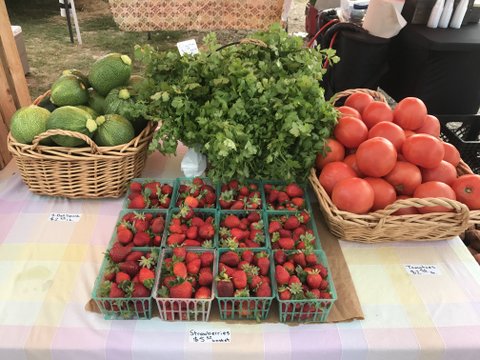 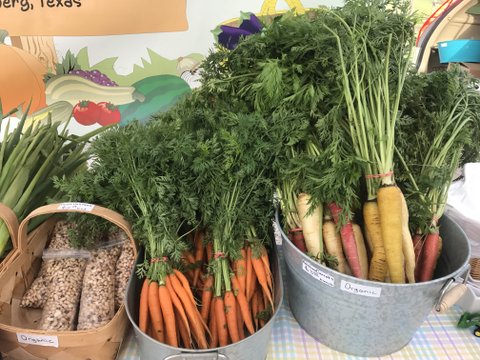 The Fulshear Farmers’ Market, run by Ramona Ridge of Forever Fulshear, has become a destination for many on a Saturday morning. Two weeks ago, I had the pleasure and opportunity to meet Ramona and get a guided tour, complete with time to chat with the vendors

Ramona greeted me right away, and took me under her wing for the morning. The atmosphere was lively and friendly, and it felt great to be in the middle of it as Ramona fielded questions from potential vendors and chatted with friends and newcomers alike.

Overall, the tone of the market is laid back, but purposeful. Guests are there to get their eggs, bread, meat and produce, and maybe even some cut flowers or juices, soaps, or food-related gifts. There are plenty of options and people have their favorites. 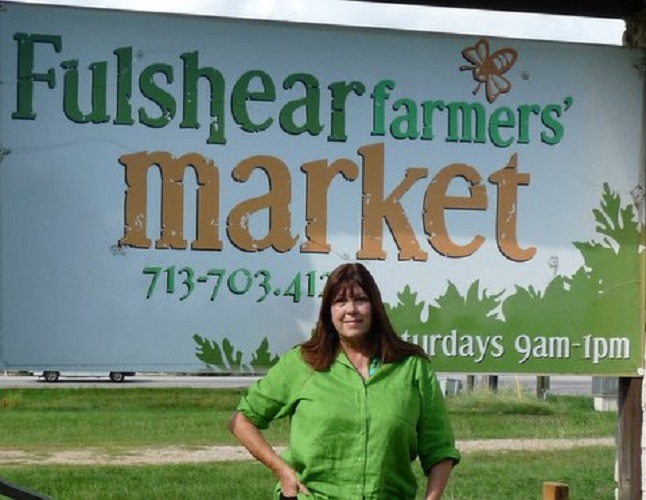